My 1 year journey to being Vegan

It has been a year since I adopted a complete vegan diet. I wanted to take some time to reflect on this period & maybe set a direction on how to make this path even more beautiful for me & incidentally make it sustainable as well. Last year in August, I was in emotional distress. It was a kind of distress where most of us would make an impulsive decision just to get over it. And my impulsive decision was - To Go Vegan.

I was brought up as a lacto-vegetarian. Given how skinny I am, the idea of giving up milk & milk products as an important source of proteins was a bit far-fetched for me. I couldn’t remember a single day at home when I didn’t drink milk in the morning. And I loved butter. And I absolutely loved cheese. And sweets & ice-creams. Truth was, I loved most of the milk-products. All of this, while also having some compassion for the animals & standing against the cruelty towards them. I felt like a hypocrite - where my morals were set by the conditions in which I grew up (as Jain) & not by a conscious choice of my own. Just by not eating meat, fish & eggs, I thought that I was already doing enough. While I had heard much about PETA & other organisations, there wasn’t a big culture of Veganism visible to me in India.

Fast forward my life in Berlin - probably the vegan capital of Europe if not the world. I find myself surrounded by so much Veganism[¹] around. Bunch of my friends here are Vegans. Almost every restaurant has vegan options & every other restaurant seems to be exclusively Vegan. The thoughts of going Vegan kept nagging me quite often & it was getting difficult to brush them aside. This was also the time where I started taking first steps in my spiritual journey. A belief that ‘A man is what he eats’ started making nest in my mind. All this together with the urge to make an impulsive decision was a perfect timing for me to go vegan. Going vegan was finally a choice that I made on my own & not something that I grew up with. A choice that aligns completely with my morals & does not stop half way. I would be lying if I say that I don’t miss those chocolate bars on the supermarket shelfs. Or that giving up Paneer was easy because there is Tofu. But as we know - “Hardest choices requires strongest something something” :D When I pour that Soya drink in my Haferflocken, I remember that I am not drinking animal milk. I get my kick by going “Eine Kugel veganes Eis in einer veganen Waffel” at ice-cream parlours. All these make me happy & bring me a little peace.

This is nothing but just a first step for me on a path without any goal yet. But the path itself hasn’t been always easy. There is a constant struggle to maintain my veganism when I am in India or in country side in Europe. And then there was an alarming period at the beginning when my body was not used to this change in diet & lead to serious weight issues. Here’s to me hoping the path ahead won’t have these same difficulties. Also, I have been lucky to be surrounded by people who have similar lifestyle choices. It makes the journey a lot easier.

Leipzig story - I came across this interesting family at a fleamarket in Leipzig who have this alternative/vegan project called “Blueberry Beach”. I can recommend to check it out. They made this really witty artwork. 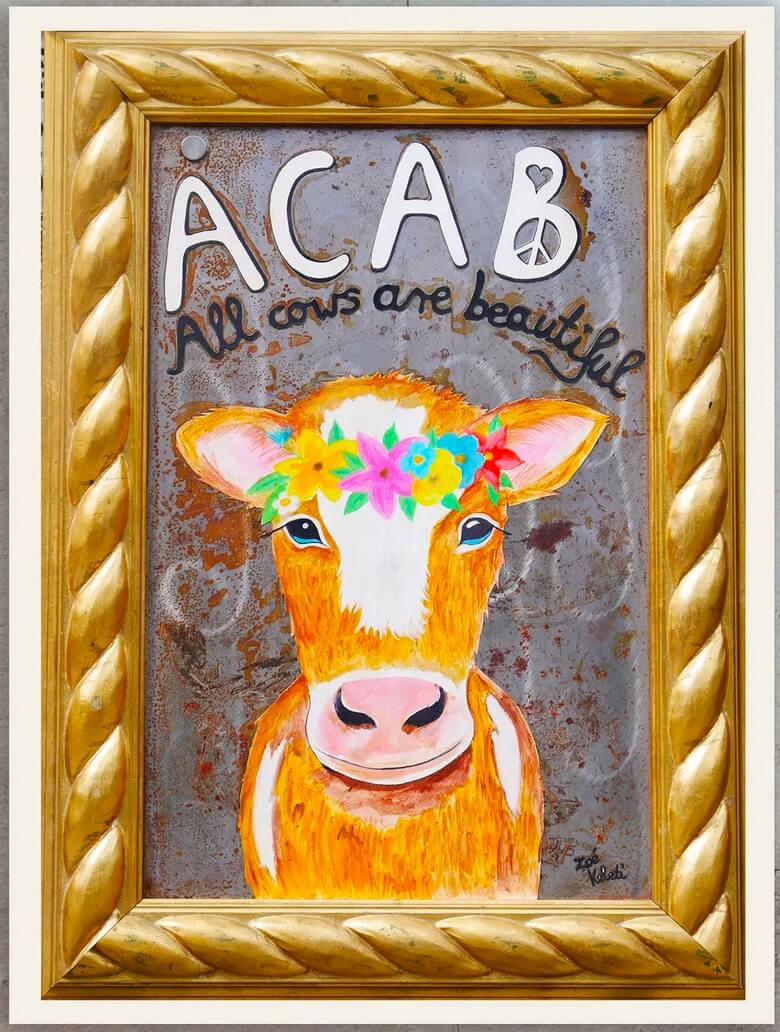 The only #ACAB that I support.

P.S - Most wines aren’t vegan. If you knew that, great. I almost didn’t believe it when I was informed about that & went into a state of temporary shock when I found it out.

¹ At times, this is taken too far in my opinion. There even exists a Vegan Mineralwasser. This is atrocious. Enabler for Slacktivism?

One of the most well-known Anarcha-Queer-Feminist Collective in Berlin. While I am not a super fan of the way they carry out their radical left activism (admittedly, I don’t know much about activism), I have to admit that the state’s response towards them has been quite poor. If you need to deploy a force of 300+ for a demo attended by less than 100 peaceful people, you are doing something wrong. 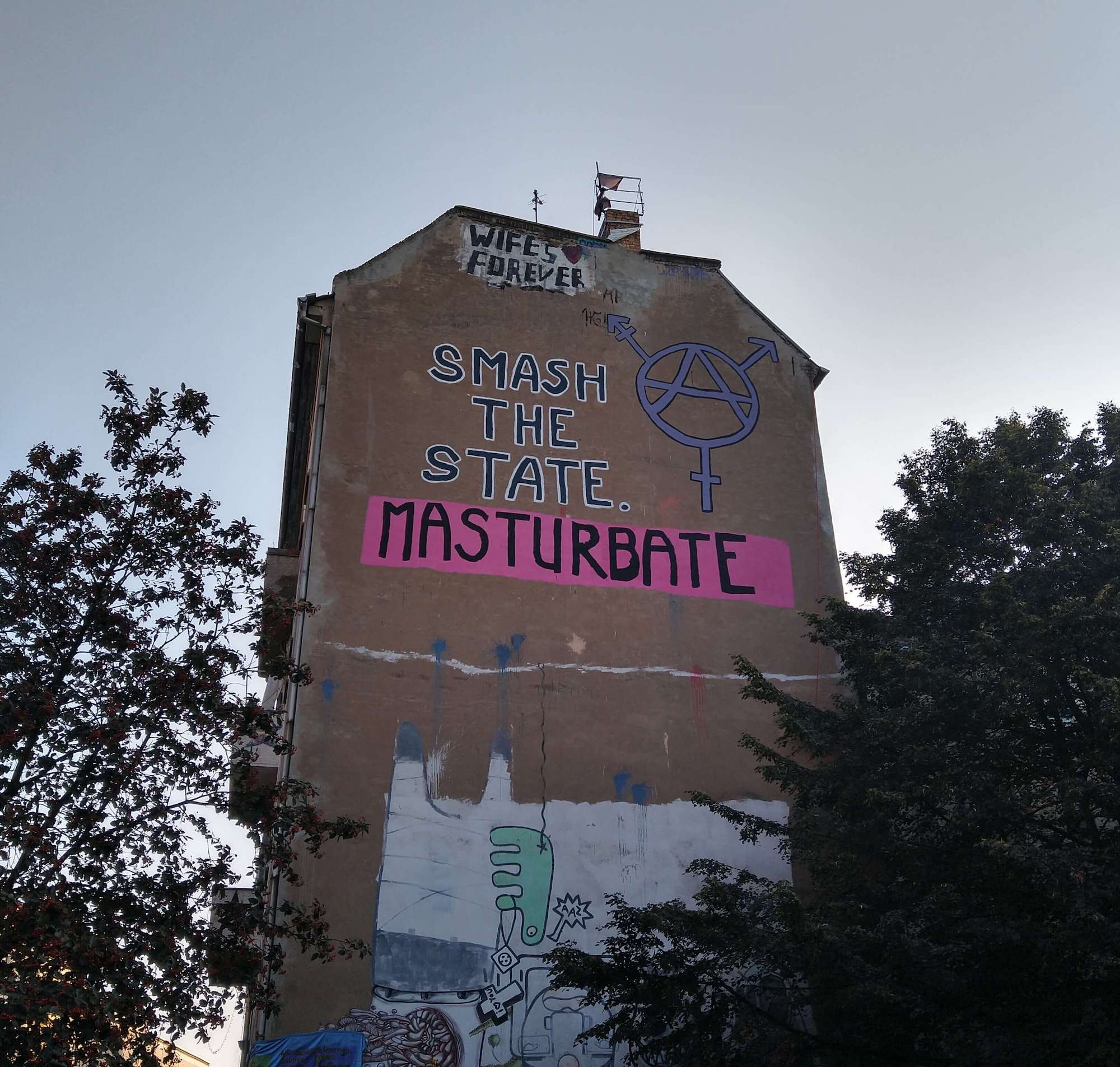 Please stop wasting taxpayer’s money on those constant policing over weekends in this part of the district. Just take a step back a little. People clearly love this neighbourhood (else why would there be gentrification* here?) & find it refreshingly different. At least I do (Not a big fan of conformity).

*I like to think that I am not contributing to that. Ok, maybe a little without my knowledge

This is not going to be another blog post telling how evil all social media & internet news* is. There are already hundreds of such blog posts out there. This is just about me lately realizing how much of my time is consumed by these platforms. Initially, I believed that if I am following the right topics, people & news*, the returns would outweigh the cost of my time, but I no longer believe that to be the case for myself. I thought that by consuming vast amounts of information from the internet, I am keeping myself well-informed & updated with current information. With some introspection, I have found that to be incorrect. Consumption of so much opinions & thoughts on a daily basis can be harmful for the human mind.

Usually, I would try to find a good balance instead of blocking something completely, but not this time. So I have decided to block myself from accessing all social media & news* outlets. One may ask, “why write a blog post about it?”. That is because I was once told that if you ever want to make a drastic change in your life & want to keep up with it, express it publicly. So I guess this is what I am doing here :)

*I would hardly call them “news”. These days they are mostly propaganda machine where everything is amplified.